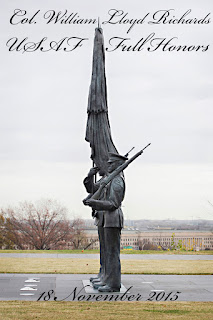 When Col. Richards' family commissioned this slide show from Tracey Attlee, they requested it be narrated by pure audio recorded on the day of the Ceremonies, which we always do, but to the point that any sound bites heard in the finished slide show were exclusively from the Ceremonies.  In other words, they did not wish to hear (tasteful) royalty free instrumental music running in the background of their slide show.  Col. Richards' family only wanted to hear the live sounds we captured.

This spurred our creative imagination as to how to best display Attlee USAF Full Honors Photos at Arlington National Cemetery with sound bites that would complement the photographic transitions from sequence to sequence.  To say we edited, repositioned and remade this fine art slide show 50 times would be an understatement, but then, we are perfectionists!  And after all this time and all these views the finished piece moves us.

Here is our tribute to Col. Richards and all veterans, with thanks to the Richards and Ficke families for allowing us to share this slide show with the public.  Thank you also to Holly Holeman, on Facebook as "Holly AtArlington" for creating yet another fresh, lovely wreath and florals to grace Col. Richards' Life Celebration and Full Honors Ceremonies.

Posted by Tracey Attlee at 9:42 AM No comments: