Washington DC and The Beatles 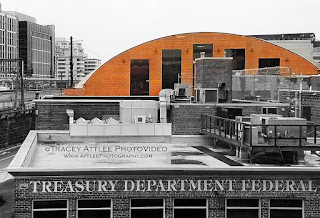 Thinking of you Paul McCartney and Ringo Starr!  While assisting on a photo shoot in the NoMa neighborhood of Washington, D.C. yesterday with architectural photographer Todd A. Smith www.tasphoto.com for Toll Brothers we looked across the rooftops to that building with the concrete barrel-vault roof.  Formerly known as the Washington Coliseum it is where the Beatles’ first ever U.S. concert was held, February 11, 1964. The Beatles played in a circular, theatre-in-the-round style, thoughtfully rotating their equipment between sets so the thousands of fans on the various sides of the building could have a turn getting a good look.

Tracey Attlee
I am a commercial portrait photographer and videographer in Alexandria, VA who grew up by the sea in New Jersey. Filming and photographing corporate and social events in the Washington, DC region as well as Jersey beach engagements and weddings are my life after serving as a White House credentialed photographer. My White House sponsors were the Associated Press, New York Times, Reuters and Time magazine. Making good quality photographs and videos between New York and Washington, D.C. has been my pleasure and passion for over 25 years. My work starts with a photojournalistic look from my background as a news photographer graced with a beautiful presentation of personality and emotion. It starts with my compositions in camera and finishes in post production when I individually retouch and post produce my digital photographs and video by hand. After college I attended art school to study watercolor painting and still use my art training daily, in camera, in retouching and in album design. With guidance from my wonderful mentor, French society photographer Claire Flanders, I became an award-winning photographer and videographer.