Gentlemen considering a surprise marriage proposal to their girlfriend might like to hear how Jeremy Keck styled his on Valentine's night in Washington, DC.

After three months of planning, Jeremy arranged for delivery of wine, candles and two dozen red roses to Erin's townhouse after work.  Then, a hairdresser and a makeup artist rang the bell and came in to help beloved girlfriend Erin prepare for a nice Valentine's dinner out.  Jeremy got himself ready for the evening across town, wearing the new and carefully tailored suit Erin purchased for him and the same necktie he wore on his first date with her. Jeremy arrived via hired transportation with pink longstem roses.  The ring was hidden in his suit.  He was to escort her to a fine dinner out at Fogo de Chao.  On the way, he suggested a quick stop at his favorite quiet space, the north side of DC's Lincoln Memorial.  As of Valentine's Day 2013 Jeremy had never even said "I love you" to Erin.  After that innocent little stop, the memory was made and it is here:  http://video214.com/play/vL1rgWoSJl0IdDdIMQwUQA/s/dark

Not one to overlook details, Jeremy wrapped up his evening with another surprise.  Waiting tableside at the restaurant for Erin were her parents.  And his mother. All had flown in secretly and were seated in advance to greet Erin and Jeremy upon arrival to the restaurant! 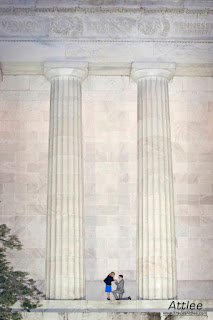 Tracey Attlee of Attlee Weddings and Portraits, Alexandria, VA, has photographed weddings, engagements and secret marriage proposals from Washington, DC to New York for over 20 years.
Posted by Tracey Attlee at 5:54 PM 2 comments: